The word Nowruz itself means “new day” and is spelled and pronounced differently depending on the country: Novruz, Nowruz, Navruz, Nooruz, Nevruz, Nauryz… . Nowruz, the day of the spring equinox, is an ancestral festival that marks the first day of spring and the renewal of nature. The awakening and rebirth of nature after winter is celebrated. It is the New Year, the beginning of the year for more than 300 million people in Central Asia, the Balkans, the Caucasus, the Black Sea basin, the Middle East and other regions. It has been celebrated for more than 3000 years. 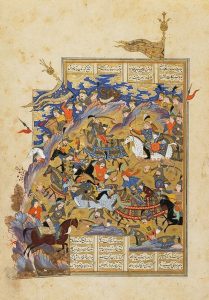 LEGENDS ABOUT NOWRUZ           Folio from a Shahnama by Firdawsi; Battle between Bahram Chubina and Sava. (click on the image to read more)

The roots of the festival go back to the Mesopotamian cult of Tammuz, god of fertility, who died and rose every year. Preparations begin a few weeks prior to the date where the spirit of renewal is emphasized, so sales of clothing and household items increase considerably. The celebration has a strong influence of Zoroastrianism, the fight of good against evil, the arrival of the new year represents the end of winter darkness and the rebirth of light and fertility.

There are different theories about the origins of Nowruz, developed by various scholars: for some (such as the Danish Iranianologist Kristiansen) this festival would be the legacy of the Babylonian festival of Zadmuk. But he is the Persian mathematician, astronomer, geographer, physicist, philosopher, traveller, historian and pharmacist Abū ‘r-Raihān Muhammad ibn Ahmad al-Bīrūnī (Al Biruni, Kath, Korasmia, September 15, 973 – Ghazni, December 13, 1048) who offers us a great deal of information about Nowruz, especially in the books Asar Al-Bagiah and Al-Qanun al-Masoudi (in the latter, in particular, he explains Nowruz from the point of view of calculation techniques of the calendar).

In short, Al-Bīrūnī points out that Nowruz commemorates the day on which the Angel of Victory encouraged the human spirit to create ever new things, and that, therefore, the anniversary expresses a great wealth of blessings: on this night he tells Al-Bīrūnī quoting Sayd Ibn Fazi from Mount Damavand, the very high peak overlooking Tehran, sparks are released, and there are those who swear they saw a flame rise from the pinnacle of the glacier.

According to another legend, recorded by Al-Bīrūnī himself, King Solomon, son of David, had lost his ring, and with it he had also lost the kingdom. But one day he retrieved the ring and the kingdom from him and in commemoration of this fact the Persians called that day “the new day”, the day of Nowruz. 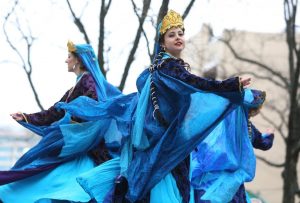 On the other hand, for others, Al-Bīrūnī also collects in the same books, Nowruz must be connected with King Jamshid, son of Tahmuress, who established a series of religious reforms on the same day he ascended the throne to rule almost the entire world. ; such reforms pleased the people, and so Jamshid turned the anniversary of that day, which had renewed the life of the community, into a festival, the festival of NowRuz.

The anniversary was later also observed by the ancient kings, and the celebrations were organized according to a special hierarchy: the first day is said to belong to the Kings, the second to the aristocrats, the third to the king’s officials, the a fourth to court servants, a fifth to city dwellers, and a sixth to peasants. Although for the Sassanian kings, however, Al-Bīrūnī points out, on the first day of NowRuz the king summoned the people, inviting them to brotherhood; the latter dealt with the problems of the rural population; the third day belonged to the clergy and soldiers, the fourth to the royal family, the fifth to the king’s servants, who were later rewarded or promoted in rank, and the sixth to the monarch himself. 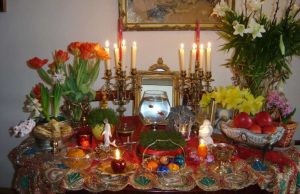 Other traditions, always according to Al-Bīrūnī, added additional elements to the exploits of Jamshid, narrating that the great king had built a chariot on board that crossed the skies; once he traveled from Damavand to Babel, on the coast of the Caspian Sea, and all the people gathered to watch him pass: Nowruz would also be the annual festive celebration of that passage.

The figure of Jamshid appears in many of the legends related to NowRuz. Al-Bīrūnī, quoting a Zoroastrian priest, reports that sugar cane was discovered in Iran on the day of Nowruz when Jamshid drank some of the sap secreted from its trunk: he found it sweet, and ordered him to work to produce sugar. . Sugar thus became a popular product, and from then on it was used to make sweets and offer them for the New Year.

The concept of sweetness is also related to the popular belief that if you wake up on the morning of Nowruz, and silently taste some “honey” by taking it with three fingers and lighting a candle, you will be preserved from illness.

Al-Biruni also cites Ibn Abbas to introduce one of the traditions that illustrates the fusion of the Iranian Zoroastrian tradition of Nowruz with Islam.

Among the most popular legends, which have now become part of Persian fables, is the return of “Uncle New Year”: every year, on the first day of spring, Uncle New Year wears a felt hat, he wraps himself in a scarf and descends. in town, leaning on his staff: he will visit all the houses of Persia, bringing the new year to all the people.

The Nowruz commemoration was inscribed in 2009 on the Representative List of the Intangible Cultural Heritage of Humanity as a cultural tradition observed by numerous peoples. Nowruz is the celebration of the new year in many countries of the world. It is a holiday to wish each other prosperity and renewal of the life cycle. An important characteristic custom of this period is that of gathering to eat with family and friends around a table adorned with objects that symbolize purity, luminosity, life and prosperity. 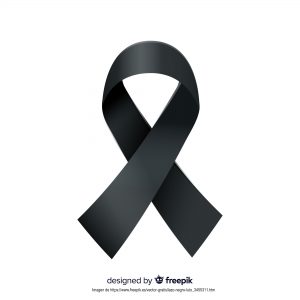